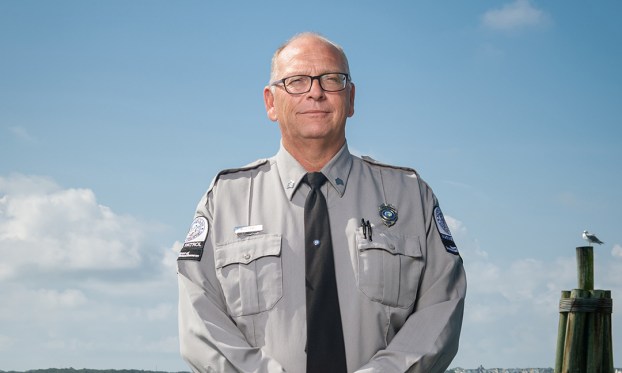 Sgt. Odell Williams of Hyde County is the North Carolina Marine Patrol Officer of the year for 2021, an honor which he says the officers who work with him deserve as much as he does.

“If it weren’t for them, I would be nothing anyway,” Williams said. “It all goes back to teamwork.”

Capt. Chris Lee, who nominated Williams for the award, said Williams’ humbleness is part of his personality. Lee says Williams’ exemplary work stands out and the officers in his district who voted for him agree.

“He’s probably deserved it for years,” Lee said. “He always has been and always will be someone who goes above and beyond.”

Lee describes Williams as a “good ol’ fella” who is there to help, no matter what time of the day or night he is called.

Williams distinguished himself this past year by filling the gap left by staffing shortages. When his long-time captain retired, the district was without a leader for six months. In that same period, Williams also worked in the field to cover at least four vacant officer positions.

“Throughout his 25-year career, Sgt. Williams has been a standup officer, is always there regardless of circumstance, has never missed a beat or even thought about slowing down,” said Marine Patrol Col. Carter Witten. “There is no other more deserving officer.”

Williams, 55, was born in Belhaven. He graduated from Mattamuskeet High School in 1985 and received a certificate as a heavy equipment mechanic from Beaufort County Community College in 1987.

He began with the State of North Carolina in 1996 with the Department of Corrections at Hyde Correctional Institute, where he worked for seven years and was promoted to the rank of sergeant in 1998.

While at the prison, Williams talked to two Marine Patrol officers who came to his neighborhood to help after a hurricane and he then knew what he wanted to do in life. He attended basic law enforcement training at night, received his certificate and began working with the Hyde County Sheriff’s Department.

“I wanted to be with the North Carolina Marine Patrol since day one, but I was always told I needed to gain some experience before applying for the job,” Williams said.

He began his career with the Marine Patrol in September of 2004, stationed on the 48-foot patrol vessel Roanoke in Nags Head. He was assigned to the vessel for 26 months before transferring to Hyde County.

Williams worked in the field in Hyde County, solving numerous cases, including one that resulted in a large seizure of striped bass with replacement costs totaling more than $373,000. He was promoted to sergeant in 2012 and began supervising eight officers who patrol the southern half of District 1, which includes Hyde County, Dare County and the P/V Roanoke.

Williams holds his intermediate law enforcement certificate and is a field training officer and background investigator. His background in heavy equipment mechanics also makes him an asset to the Marine Patrol as he can help officers across the state fix mechanical equipment issues and get back in the field faster.

Williams lives near Swan Quarter with his wife of 30 years, Viola Williams. He has two children, Tyler, 21, and Mary Grace, 15.