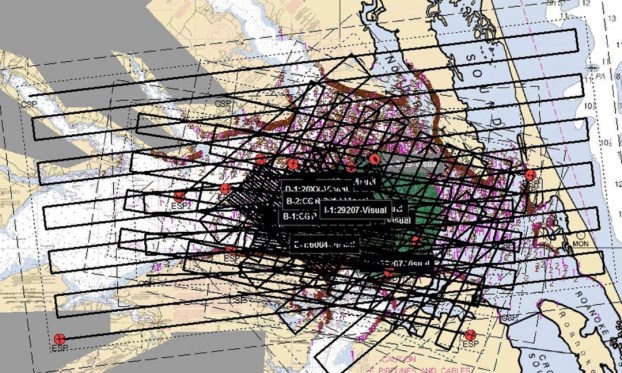 Graphic of the combined search patterns conducted by Coast Guard assets in the vicinity of the Albemarle Sound to search for two men who went missing after a reported helicopter crash on July 19, 2021. U.S. Coast Guard graphic

On Wednesday, the Coast Guard suspended the search for two men after their helicopter was downed near the Albemarle Sound, according to a press release from the U.S Coast Guard 5th District.

Coast Guard personnel and members of responding partner agencies searched a combined area of 3,303 miles over the course of 38 hours.

Watchstanders at Coast Guard Sector North Carolina Command Center were notified by a concerned friend that lost communication with the two people aboard a Robinson R44 helicopter at 6:40 p.m. on Monday. The two men had departed from Mecklenburg Brunswick Regional Airport in Virginia and planned to land at the Dare County Regional Airport the same evening, according to the release.

Watchstanders launched air and surface assets to search the Albemarle Sound where the aircraft was last observed. Debris from the helicopter was discovered during the course of the search at the mouth of the Alligator River.

“Suspending a search is one of the hardest decisions we make in the Coast Guard,” said Cmdr. Corrie Sergent, chief of response for Sector North Carolina. “As a member of this unified response, I think I can safely say that this sentiment is shared by our partner agencies as well. We were able to coordinate a robust search effort by air and on the water with a dedicated team of responders. Our sincere thoughts are with the families of the two men during this incredibly difficult time.”

The Coast Guard-led search included the following assets and agencies: