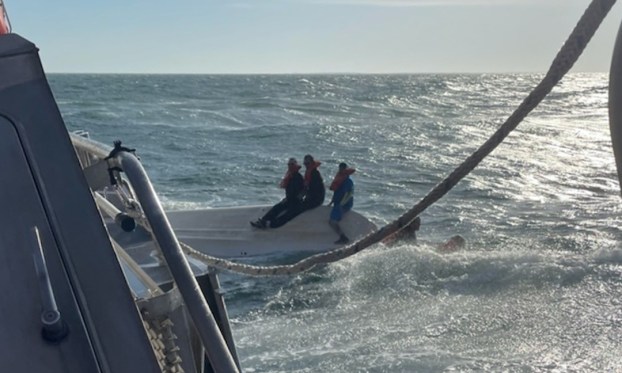 A Coast Guard boatcrew makes its approach on a sinking vessel that left five people in the water off of Oregon Inlet on April 27, 2021. The boatcrew rescued all five individuals and transported them to Coast Guard Station Oregon Inlet where they were met by Dare County EMS. U.S. Coast Guard photo

The Coast Guard rescued five people from a capsized vessel off of Oregon Inlet on Tuesday, April 27.

All five survivors were rescued and are being treated for hypothermia, according to a press release from the U.S. Coast Guard 5th District Mid-Atlantic.

Watchstanders at Coast Guard Sector North Carolina received a report from the Dare County Sheriff’s Office 911 Communications Center at about 5:25 p.m. Tuesday that a 26-foot recreational vessel was taking on water six miles from Oregon Inlet with five people on board, stated the release.

“A 47-foot Response Boat-Medium boatcrew from Coast Guard Station Oregon Inlet was launched to provide assistance. At 6:06 p.m., the boatcrew located the capsized vessel near the last known position provided by Dare County dispatch,” stated the release. “Two people were located in the water and three people were sitting on the hull of the overturned vessel. The boatcrew retrieved all five passengers and transported them to Station Oregon Inlet where they were met by local EMS and taken to the Outer Banks Hospital for further treatment.”

“Thankfully, these mariners were prepared. Donning life jackets and staying near their capsized vessel was the absolute right decision,” said Cmdr. Courtney Sergent, search and rescue mission coordinator at Sector North Carolina. “Due to their quick actions, our Coast Guard crews and local partners were able to locate them and bring them safely home to their families.” 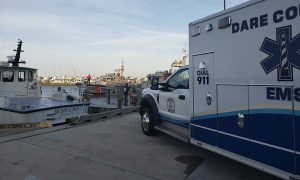 Not all cats mind getting wet. Between a river, creeks, lakes, ditches and canals, Alligator River National Wildlife Refuge has... read more