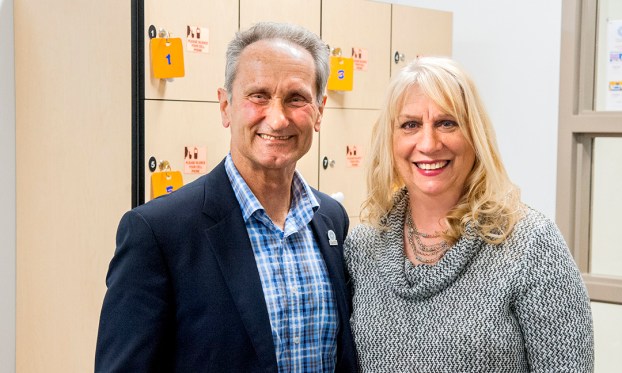 Doug and Diana Gardner stand in front of the named lockers in the Charles H. Ward Library and Knowledge Commons. Courtesy COA

College of The Albemarle (COA) Foundation has announced a donation as part of its emerging capital campaign for lockers on the second floor of the Charles H. Ward Library and Knowledge Commons at COA-Elizabeth City.

The lockers will be named for Doug and Diana Gardner after the couple gave $5,000 towards the campaign’s $1.2 million goal. The lockers have been installed and are available for COA students to store items while utilizing services offered by the Academic Support Center. The center, located on the second floor, provides COA students with free tutoring services and various academic workshops. The math, writing and testing centers are also located on this floor.

The Gardners have been avid supporters of COA for almost 23 years. Doug Gardner served on the Board of Trustees from 2007-18 and currently serves as chair of COA’s Foundation Board of Directors. The Gardners are advocates of secondary education, particularly the affordable, quality education that COA provides in its service area. Doug was a 25-year member and two-time chair of the Education Foundation of Elizabeth-City Pasquotank Public Schools. Diana has been a pioneer in women’s leadership locally. She was the first female president of the Elizabeth City Rotary Club and the first to head the board of directors of the Elizabeth City Area Chamber of Commerce. She is the immediate past president of the Albemarle Area Association of REALTORS.

“At COA we say that we ‘transform lives.’ The Charles H. Ward Library and Knowledge Commons is at the heart of what the college does. We are proud to help that effort in a small way. I look forward to assisting my colleagues on the Capital Campaign Committee to reach our goal in the coming months,” Doug Gardner said.

COA Foundation’s goal is to raise $1.2 million dollars for furniture, fixtures, equipment and future programming for new building construction at all four of COA’s campuses. For more information on the emerging capital campaign, contact Amy Alcocer at 252-335-0821, ext. 2263 or amy_alcocer68@albemarle.edu.

College of The Albemarle’s (COA) Performing Arts Center in Elizabeth City is welcoming patrons back with the first in-person performance... read more