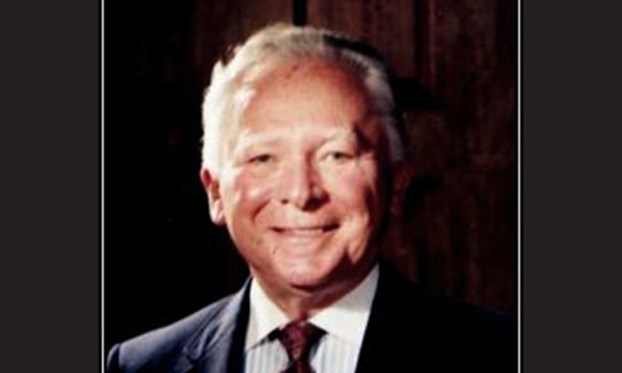 Russell Etheridge Twiford died peacefully at home on Saturday, February 27, 2021. He was born on March 7, 1926, the son of the late Clarence LeRoy Twiford and Blanche Cannon Twiford.

A life-long resident of Pasquotank County, he graduated from Elizabeth City High School where he was President of the Student Body.

A veteran of World War II, he served three and one-half years in the United States Navy. His last active-duty station was as First Lieutenant aboard the U.S.S. Auburn (AGC 10) and following his release from active duty, served as a Lieutenant in the U. S. Naval Reserve for several years.

He attended The University of North Carolina at Chapel Hill where he received a Certificate in Naval Science and Engineering and an AB Degree in Political Science. While at The University, he was a member of the University Band, the Men’s Glee Club, NROTC Unit and the ATO Social Fraternity. In 1997, he was appointed a member of The Chancellor’s Club.

In 1952, Russell received his Law Degree, LLB, from Wake Forest College School of Law, Wake Forest, North Carolina. He was the Vice President of his graduating class and a member of the P.A.D. Law Fraternity. He received a JD Degree from Wake Forest University School of Law, Winston-Salem, North Carolina, where he served a four-year term on The Law Alumni Council and he was later elected for two four-year terms on The Board of Visitors.

Following his admission by the North Carolina State Bar in September 1952, he opened his private office for the general practice of law in Elizabeth City. In 1962, he opened his second law office in Manteo. He was engaged primarily in civil and criminal litigation.

Locally he was elected and served as Prosecuting Attorney for Pasquotank and until its merger with the City, as the Attorney for the Elizabeth City Department of Public Utilities, Inc.; State Vice President of the North Carolina Junior Chamber of Commerce, local  Jaycee President; Director of the American Red Cross; Commodore of the Pasquotank River Yacht Club; Race Chairman for the Unlimited Hydroplane International Cup Regatta; President of the Northeastern Young Democrats Club; the first local President of Ducks Unlimited and Director in the Senior Chamber of Commerce. He was attorney for and served on the Board of Directors of The Planters National Bank and Trust Company. He was a member of the VFW, American Legion, Pine Lakes Golf and Country Club, and The First Baptist Church, where he donated The Blanche and Clarence Twiford Memorial Library in remembrance of his parents.

At the time of his retirement from the practice of law, he was the senior partner in the law firm of Twiford, Morrison, O’Neal, Vincent and Williams (now The Twiford Law Firm, L.L.P.) with offices in Elizabeth City and Manteo.

He established the Russell E. Twiford Scholarship Funds for deserving students from Northeastern North Carolina, for undergraduates at the University of North Carolina at Chapel Hill and for law students at Wake Forest University School of Law, Winston-Salem.

Dare County, where his forefathers were shipwrecked, was his ancestral home and he always felt close to the county and its people. One of his main interests was the protection of the environment of the fragile maritime forest and toward that end, he donated land to The Nature Conservancy, Nags Head Woods Preserve, Jockey’s Ridge State Park and the Buxton Woods Preserve.   He also donated land to the Kitty Hawk Municipal Center, Nags Head Recreation Center, Dare County Middle School at Nags Head, Dare County Municipal Center and for the Dare County College of The Albemarle campus.

Russell was a life member of The Old Timers. He was a recipient of the Long Leaf Pine in recognition of his contributions to the people of North Carolina and was named a Nags Head Lightkeeper in recognition of his leadership and contributions to Nags Head and Dare County. Russell was a founding Director-Stockholder of Gateway Bank and Trust Company.

Other than Northeastern North Carolina and its people, his second love was Aspen-Basalt, Colorado.

The family wishes to thank his loving and faithful caregivers, Mary Sutton and Dennis Dance as well as Elizabeth and the staff at Amedisys Hospice.

A funeral service with military honors will be held at Twiford Funeral Home’s Veteran’s Park on Saturday, March 6, 2021 at 2 p.m. The family will greet visitors after the service at the funeral home.