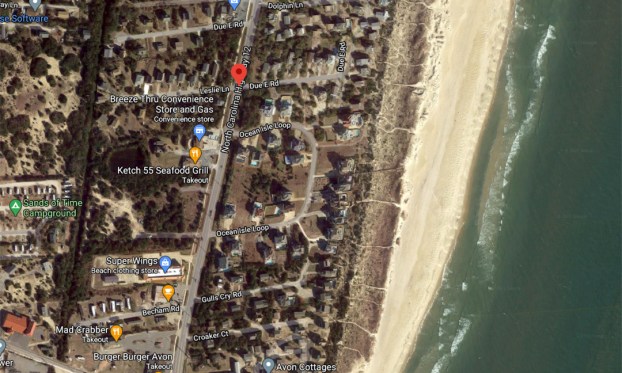 The meeting was divided into three sections with county manager Robert L. Outten in charge.

First, Outten presented the history of beach nourishment in Dare County. That project history establishes specific characteristics for the Avon project. Next, Outten answered questions posed by the 276 emails received. Finally, the citizens who signed up to speak or waved hands made comments and asked questions. Those that signed up or waved numbered 41, with 10 not responding when names were called.

Nags Head took the beach nourishment lead in the late 1980s, early 1990s to seek a federal plan to nourish its beaches. At that time, financing for federal project was 70% federal, 20% state and 10% local.

For Nags Head, the federal share for the town’s project never came through. No state money was available.

Just after the Nags Head nourishment project was finished, Hurricane Irene visited Dare County in late August. In the aftermath, Outten said public officials traveled to Jennette’s Pier to see what happened to the beach nourishment project. Nothing. The wide beach protected much of the town.

The official delegation headed to Hatteras Island but was stopped before Rodanthe. NC 12 was destroyed, pavement buckled, dunes gone, ocean water flowing. An emergency ferry system operated for a month while Hatteras Island was mostly shut down.

Out of that experience, Dare and its municipalities pressed forward to “put sand on the beach when needed and where needed.”

Buxton needed a nourishment project as well. At the time, Avon was not a concern and no help was coming from NCDOT. Sufficient funds were available in the beach nourishment fund. A service district was created in north Buxton. The project, to prevent loss of NC 12 and mitigate flooding, was finished in February 2018.

In recent memory, Avon had two rows of dunes and a wide ocean beach. Quickly, the Avon beach changed drastically due to erosion. A weather blow of any substance will send ocean water under houses on both sides of Ocean View Drive and NC 12 is flooded with deep, corrosive salt water. Public services cannot be rendered and the flooding negatively affects the economy.

“It’s only going to get worse,” said Outten. “We cannot allow Avon – just like in Buxton – to become another problem like Rodanthe.”

Outten said a delegation from Avon approached the county asking for help.

– For five years of protection, a million cubic yards of sand will be placed along the Avon shoreline running from Due East Road to the village’s southern boundary, about 2.5 miles.

– Sand will most likely come from an offshore borrow area opposite the northern portion of Avon, an estimated 9,000 to 15,000 feet from shore. However, sand from the Hollowell property in Avon could be trucked to the nourishment area.

At the virtual meeting, Outten announced that the fund has $8.5 million with $28 million in projects to be funded.

How to pay? All incorporated towns and the county received $1.4 million grant from the state to be used for beach nourishment. The towns will forward the funds to the county’s beach nourishment fund to build the Southern Shores and Avon projects.

As proposed in a letter to the 3,700 property owners in Avon, the village would be divided into two service districts. One would run along the east side of NC 12 to the ocean from Due East Drive to the village southern boundary. The other would include all properties west of NC 12 and the remnant to the north of Due East Drive on the east side of NC 12.

Searching for Other Ways

Many of the questions and comments sought other, perhaps less expensive, methods to nourish the beaches.

To questions about hardened structures like breakwaters, jetties, geo tubes, offshore reefs, Outten responded that in 2003, the North Carolina General Assembly enacted legislation that prohibits hardened structures along the oceanfront. He said “we’ve been pushing for years for more tools. We can’t get any movement.”

About financing, speakers suggested a Hatteras Island-wide or a county-wide tax; tax everybody; establish a toll on bridges, Outten said Dare County does not have the authority to establish a new tax. Like the current occupancy tax, the General Assembly has the power to grant the authority.

Some called the proposed districts and rates not equitable. Outten said the statute requires that everyone in a district be treated the same in relation to the benefit received. Several people who own properties on the oceanside but not oceanfront argued to create districts for far back homes.

The beach nourishment tax was called a “forever tax.” The tax continues in order to pay for maintenance expected in five years. Another speaker reminded participants that the tax amount is based on each property’s assessment, making equity already a part of the financing.

Regarding grants from the state or federal government, Outten said NCDOT doesn’t have the funds to do it; there is not a source for grants; no recurring monies exist. “We have not found a way” other than occupancy tax and service districts.

Stephen Day, of Avon, objected to paying taxes to nourish federal beaches and keep state highway NC 12 whole. “Go back. Go back again until you get what you need.”

Outten responded: “We can’t wait; we don’t have time to wait.”

Linda Hooper said “it doesn’t make sense to burden us. We don’t have access to any part of the beach.”

To the beach access issue, Outten responded that the project has no plans for beach access. The beach is owned and controlled by the National Park Service.

The National Park Service is in the process of developing a sediment management framework to facilitate permit applications. Currently, a final environment impact statement is ready for a 30-day public review. A record of decision is expected in late spring.

Outten said that the county’s Board of Commissioners will consider information from the Feb. 24 meeting to decide on a project and set a final tax rate. Another public hearing will be held.

Many people participating in the meeting thanked Outten for his presentation. At least two said the presentation answered their questions.

For more information, go to Darenc.com/Avonbn. A link to the Feb. 24 meeting is posted at the top of the page, otherwise go to youtube.com/darecounty to view the two hour meeting. Send comments to DareCountyPR@darenc.com.