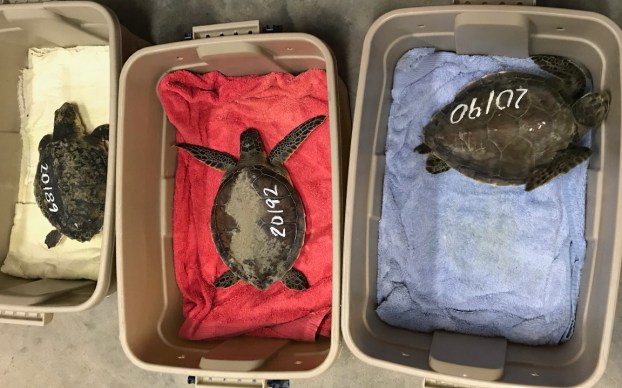 The first sea turtle patients affected by cold-stunning have arrived at the Sea Turtle Assistance and Rehabilitation (STAR) Center at the North Carolina Aquarium on Roanoke Island. As of Friday, five new patients – four greens and one Kemp’s Ridley – were being treated at the sea turtle hospital.

“Cold-stunning is caused when water temperatures drop quickly. Sea turtles close to shore and unable to get back to the warmer waters of the Gulf Stream can experience a hypothermic condition that renders these aquatic reptiles unable to properly swim,” stated a press release from NCARI.

Treatment involves gradually warming the animals back to their healthy temperature, then making sure they are able to swim and eat normally.

“Because cold-stunned turtles are vulnerable to other illness and injury, the STAR Center staff and veterinary team may treat them for a variety of other issues,” stated the aquarium. “Depending on the condition of their health, recovery may take weeks or months before they are cleared for release.”

These five turtles were recovered near Hatteras by the volunteer non-profit Network for Endangered Sea Turtles (N.E.S.T) and by the National Park Service before being transported to the STAR Center. 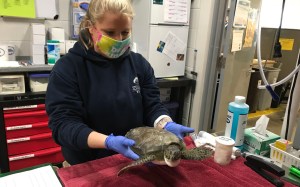 Although the STAR Center treats sick or injured sea turtles year-round, “cold-stun season” – typically December through February – is often the busiest time for the facility, which is located north of Manteo on Roanoke Island. “Dozens, even hundreds, of turtle patients have come through the hospital for treatment, and in past winters, the staff has had to get creative with finding space for them all,” stated NCARI. “Recovery tubs have been known to take up the entire public-visiting side of the STAR Center, and because of the need for separate spaces held at different temperatures, the aquarium’s gatehouse restrooms are often utilized. When playing host to these aquatic reptile patients, those areas will be closed to guests so the turtles can rest and recover.”

“Additional supplies are needed in anticipation of more turtles arriving for treatment. Items can be purchased from the STAR Center’s Amazon.com wish list to help staff care for current and incoming patients,” stated the aquarium.

American white pelicans: What a wingspan!

‘Hope for the Holidays’ display lights up Collins Park

Every year, Collins Park and the Pea Island Preservation Society, Inc. partner with the Town of Manteo to shed some... read more