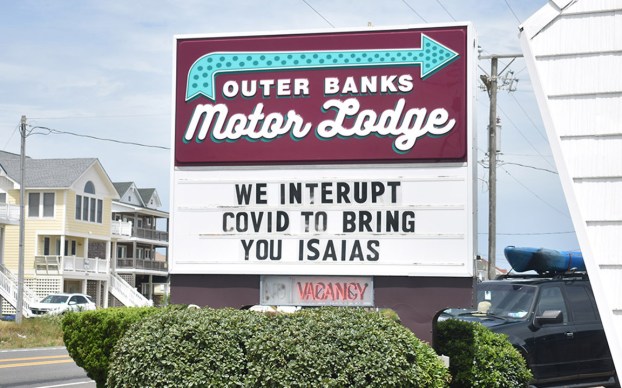 Outer Banks Motor Lodge humorously conveyed what most had to prepare for during Isaias, one of the named storms of this year’s hurricane season: a hurricane in the midst of a pandemic. Danielle Puleo file photo

The season broke records and saw 30 named storms with 12 making landfall in the continental United States.

This is the most storms on record, surpassing the 28 from 2005. The year now has the second-highest number of hurricanes on record.

The 2020 season got off to an early start with a record nine named storms from May through July. Quickly, the season exhausted the 21-name Atlantic list when Tropical Storm Wilfred formed Sept. 18.

For only the second time in history, the Greek alphabet was used for the remainder of the season, extending through the ninth name in the list, Iota.

2020 is the fifth consecutive year with an above-normal Atlantic hurricane season, with 18 above-normal seasons out of the past 26.

While the official hurricane season ended Nov. 30, the National Oceanic and Atmospheric Agency warns tropical storms may continue to develop past that day.

The Currituck County Sheriff’s Office has reported that on December 3 at around 1:30 p.m., deputies responded to 119 Raccoon... read more