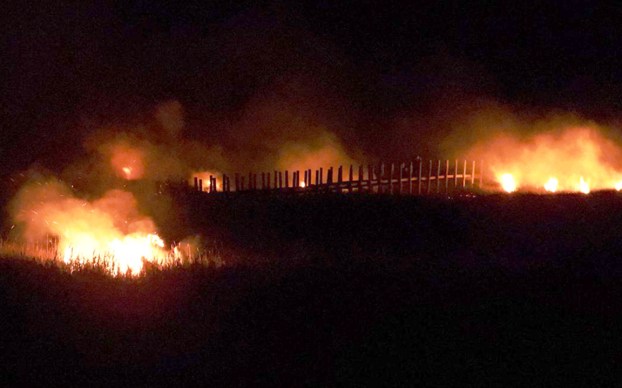 A soundside marsh fire flares up in Waves. The fire was started by fireworks. No damage was sustained by the boardwalk even though the fire reached within three feet of the structure. Gerry Lebing photo

Karen Lebing woke up and saw “a huge swath of marsh on fire.”

Paged out at 12:30 a.m., Chicamacomico Banks Volunteer Fire and Rescue Department, which has stations in Rodanthe and Salvo on Hatteras Island, responded with 10 firefighters.

Chicamacomico Banks Fire Chief Mike Daugherty said the northeast wind worked for the firefighters, who attacked the fire’s leading edge to contain the fire. The crew pulled 800 feet of five-inch hose and another 800 feet of 1-3/4 inch hose to work the fire along with flappers and shovels. 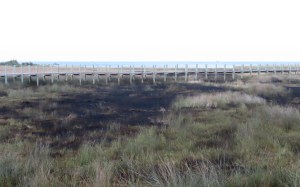 A portion of the Waves marsh that was burnedis pictured after the early Sunday morning fire. Karen Lebing photo

The fire was started by fireworks. A visiting man is reported to have immediately owned up to the act and worked beside the firefighters. It took four hours to put out the fire. The man received a warning ticket from the North Carolina Forest Service ranger.

Karen Lebing reported that no damage was sustained by her boardwalk, but that a neighbor’s pier had minor damage.

Coastal Humane Society and Friends of Felines-Hatteras Island will hold a vaccination clinic for dogs and cats on Wednesday, Oct.... read more