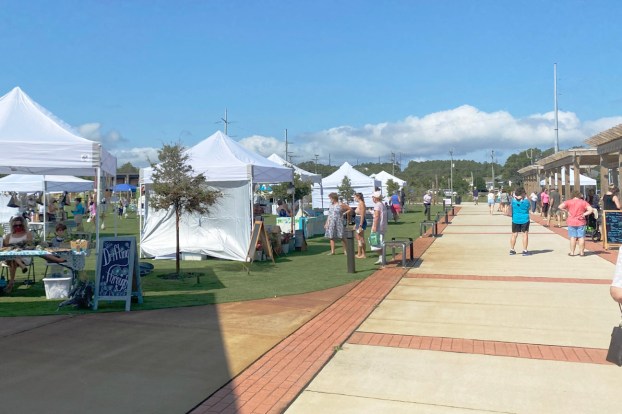 Some, concerned that a part time event planner position might be cut, pointed out that it was an important and necessary position for coordinating activities like movies, a farmer’s market and various art events that help make nags head a special place to live.

Responding to those comments near the end of the meeting, several commissioners voiced support for Dowdy Park and the farmer’s market held there, adding that there was incorrect information being circulated that the board was planning to curtail activities.

There was, however, some apparent incorrect and incomplete language in a couple of previously approved code changes that required modification.

Shortly after commissioners adopted a new flood damage prevention ordinance in June, it became apparent to staff that two sections of the ordinance needed additional language.

While one change turned out to be a simple renumbering of sections to correct a typographical error, the other addressed properties subject to a base flood elevation west of NC 12 and SR 1243. After setting a maximum fill level equal to the base flood elevation. It was determined that some properties required more fill to meet Dare County Health Department requirements.

To allow fill for lots that Nags Head would otherwise not allow, commissioners approved an amendment to allow fill equal to the base flood elevation or the minimum amount of fill required by the Dare County Health Department, whichever is greater.

In a second, unrelated public hearing on amendments to the unified development ordinance, deputy planning director Kelly Wyatt explained that minor changes were needed for clarification and to correct some errors.

According to Wyatt, both the pre-FIRM and post-FIRM dates listed within the document should be November 10, 1972.

She explained that November 10, 1972 is relevant for floodplain purposes while December 31, 1974, previously thought to be the post-FIRM date, is relevant for insurance purposes.

Also needed were some grammatical and spelling corrections, approval of stormwater management amendments, corrections to clarify that there are no supplemental standards for the use of government administrative office and to include regulations that were inadvertently omitted from the adopted UDO.

With little discussion, the board voted to approve the changes as presented.

The third public hearing was to consider allowing furniture stores as an allowable use in the commercial mixed-use area.

Furniture stores are already an allowed use within the C-2 zoning district and, according to town documents, it would be within that district only that a furniture store could be incorporated as part of a mixed use. With some exceptions, all other mixed-use designations require a conditional use permit within the C-2 district.

Because the request was submitted on behalf of Sumit Gupta of Legacy Homes, Inc. by Cahoon and Kasten Architects, PC for a project planned at 205 East Baltic Street, the former site of His Dream Center, Mayor Ben Cahoon was recused from discussions and the vote.

With little discussion, the remaining four commissioners voted to add furniture store as an allowable use for all commercial mixed-use designations including commercial with accessory residential, group development, mixed use development, multiple principal uses and shopping centers. 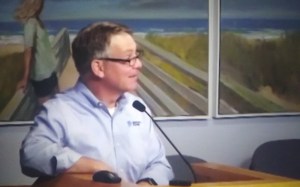 On hand for a time specific presentation, Dominion Energy’s Rob Richardson said the company was in the early stages of researching the feasibility of new electric transmission line routes.

Richardson explained that continued Dare County growth brings with it a need for 30 percent additional power. The survey work, expected to be completed in the spring of 2021, is to determine where above and underground utility lines can be run along US 158.

At the end of the presentation, commissioner Renée Cahoon pointed out that ugly poles are not needed on the west side of 158. 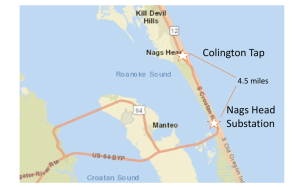 In other business for the day, Bobby Hooper was recognized for completing five years service with the town. Starting in August 2015 in facilities maintenance, he was promoted July 2019 to the newly-created stormwater and streets technician and has been cross trained in sanitation.

Interim town manager Greg Sparks presented a revised Town of Nags Head organization chart that was given a stamp of approval, as was authorization to apply for Dare County Tourism Board grants for sidewalk work from US 158 to Wrightsville Avenue at Admiral Street and renovations to the YMCA Skate Park. YMCA membership is not required to use the park. 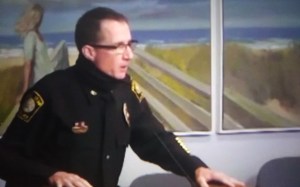 In his report, planning and development director Michael Zehner said RFQs have gone out for a decentralized wastewater development plant and commissioners might want to consider advertising for an advisory committee volunteers.

Near the end of the meeting, the board discussed lost revenue in the community due to lack of employees and approved a resolution in support of the J-1 visa exchange visitor program and asked staff to send it to other area towns and ask for their support.

The meeting ended with a closed session to discuss beach nourishment project condemnations and other confidential personnel matters with an announcement following that the issues were discussed with no action taken.