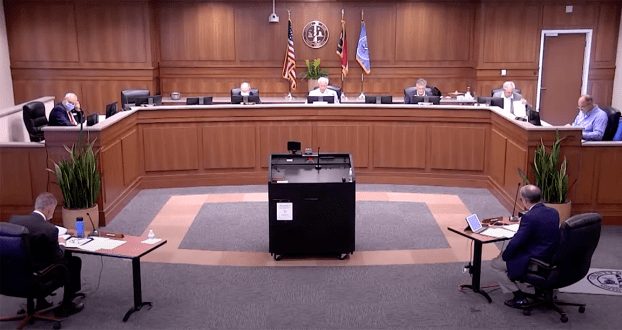 Screenshot of Dare County Board of Commissioners meeting, September 8, 2020.

On Sept. 8, Dare County Board of Commissioners put a not-to-exceed price tag of $16,359,487 on the new College of The Albemarle campus on Roanoke Island.

At the board’s regularly scheduled meeting, the commissioners also authorized Barnhill Contracting Company to proceed with demolition of the former Manteo High and Middle school buildings currently on the site. The demolition leading to site work is expected to start Monday, Sept. 14.

The recommendation for the price tag came from the board’s Capital Improvements Planning Committee, which met Thursday, Sept. 3.

At the committee meeting, county manager Robert L. Outten said “we can afford the project under the plan in place.”

The plan is called the “Capital Investment Fund and Debt Affordability Model.” With the college campus, the new animal shelter, expansion of the county’s health and human services building and four other smaller projects, the model shows total capital improvement debt at $33 million. Over four of the plan’s five years, the fund is able to maintain the fund balance coverage goal.

About finance, the committee and commissioners received upbeat news. For the months April through August, 2020, finance director David Clawson initially calculated land transfer tax revenue shortfall of 35 percent. In April and May, the land transfer tax was down 31.21% and 28.70%. But in June, the transfer tax grew 9.38%.

The not-to-exceed price tag also includes an estimate of $261,028 for furniture, fixtures and equipment, for which College of The Albemarle Foundation is expected to pay.

Ava’s road to recovery after tragedy