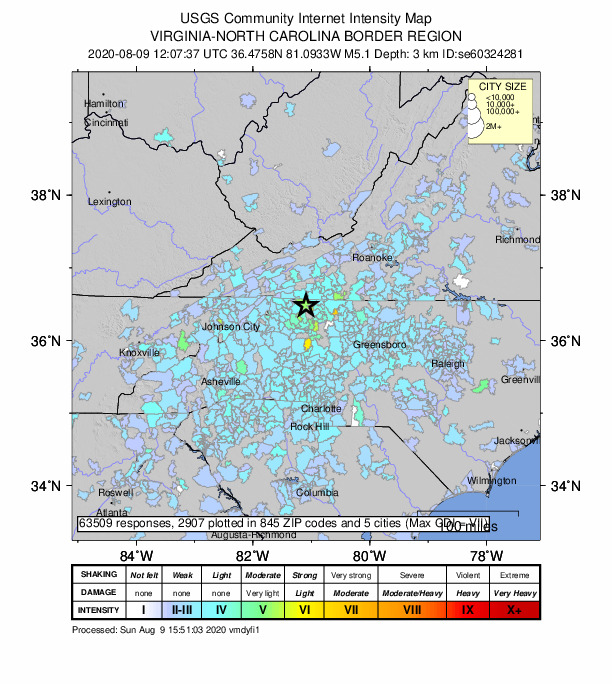 The most powerful earthquake to hit North Carolina in more than 100 years could be felt in much of the state early Sunday, rattling homes, businesses and residents.

The National Weather Service in Greenville said the 5.1-magnitude temblor struck at 8:07 a.m. about 2 miles from Sparta, following a much smaller quake several hours earlier.

There were no immediate reports of injuries; some minor damage was reported.

Michael Hull was standing in his driveway at his home in Sparta when he noticed a group of deer running.

“Not even a minute passed and the side-to-side motion started,” Hull said. “It takes you a minute to realize what’s happening, and you just can’t believe it. Then it was over. It was loud, like God was shaking a mountain at you, literally.”

Karen Backer was in her Greensboro apartment when she heard initially mistook banging in her kitchen for her roommate.

“Nope, it was the cabinet doors ‘clinking’ open and closed! My neighbors on the other hand said they felt our apartment building shaking,” Backer said. “Well, sadly, nothing surprises me in 2020, but a hurricane and an earthquake in the same week is crazy.”

It was the largest earthquake to hit the state since 1916, when a magnitude 5.5 quake occurred near Skyland, the weather service said.

The U.S. Geological Service said the quake’s epicenter was about 2.5 miles (four kilometers) southeast of Sparta, just south of the Virginia-North Carolina border. The USGS said the population in the affected region resides in structures “that are resistant to earthquake shaking, though vulnerable structures exist.”

The quake was felt in nearby states including Virginia, South Carolina and Tennessee.

“The August 9th, 2020 M 5.1 earthquake near Sparta, North Carolina, occurred as a result of oblique-reverse faulting in the upper crust of the North American plate. Focal mechanism solutions for the event indicate rupture occurred on a moderately dipping fault either striking to the northwest or south. This earthquake occurred in the interior of the North American plate. Such mid-plate earthquakes are known as intraplate earthquakes and are generally less common than interplate earthquakes that happen near tectonic plate boundaries. This earthquake was preceded by at least four small foreshocks ranging from M 2.1-2.6, beginning about 25 hours prior to the mainshock.

The Department of Veteran Affairs (VA) Community Care Program provides veterans with an opportunity to received care from a community... read more