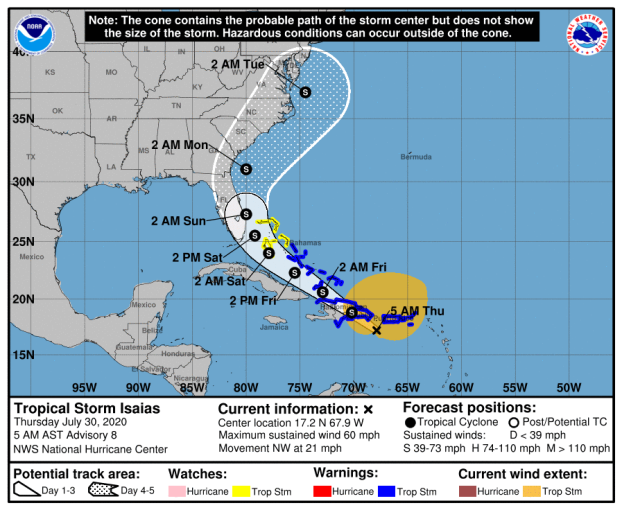 Tropical Storm Isaias battered Puerto Rico on Thursday as it continued on a forecast track toward the U.S. mainland, unleashing small landslides and causing widespread flooding and power outages on an island still recovering from previous hurricanes and earthquakes.

Especially hard hit by the storm’s maximum sustained winds of 60 mph (95 kph) was Puerto Rico’s southern region, which is still being shaken by daily tremors. Santos Seda, mayor of the southwest town of Guánica, told The Associated Press that he has received reports of downed trees and inundated neighborhoods where earthquake-damaged homes still stand.

“The emotional state of people is deteriorating more every day,” he said, adding that crews will fan out to assess damage once the weather clears.

Isaias was centered about 125 miles (205 kilometers) west of Ponce, Puerto Rico and about 105 miles (175 kilometers) east-southeast of Santo Domingo, Dominican Republic Thursday morning, according to the U.S. National Hurricane Center. It was moving west northwest at 20 mph (31 kph) and its center was expected to move over Hispaniola later on Thursday and near the southeastern Bahamas by early Friday.

The storm knocked out power to more than 300,000 clients across Puerto Rico, according to the island’s Electric Power Authority. Minor damage was reported elsewhere in the island, where tens of thousands of people still use tarps as roofs over homes damaged by Hurricane Maria in September 2017. 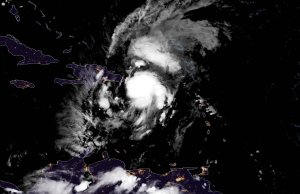 José Pagán, a 22-year-old who lives in the eastern mountain town of Juncos, said his power went out before dawn.

“I didn’t think it was going to be this strong,” he said of the storm, adding that his home is slightly flooded. “It’s a rather difficult experience because it reminds us of Maria.”

The hurricane center said Isaias, for now, is not expected to become a hurricane before reaching the U.S. mainland.

“Isaias is sending some mixed signals,” the forecast discussion stated. “Model forecasts are showing a complex evolution of the tropical cyclone during the next day or two.”

Tropical storm warnings were issued for Puerto Rico, the U.S. and British Virgin Islands, the Turks and Caicos Islands and portions of the Dominican Republic, Haiti and the Bahamas.

Isaias was expected to produce 3 to 6 inches (7 to 17 centimeters) of rain across the British and U.S. Virgin Islands and Turks and Caicos and also across Puerto Rico, northern Haiti, and eastern Cuba with isolated maximum totals of 8 inches (20 centimeters).

So far this year, Cristobal, Danielle, Edouard, Fay, Gert and Hanna have also been the earliest named Atlantic storms for their alphabetic order.

Pence to visit Raleigh in push for schools to reopen

By Bryan Anderson, Associated Press/Report for America Vice President Mike Pence will travel to Raleigh on Wednesday morning in a... read more