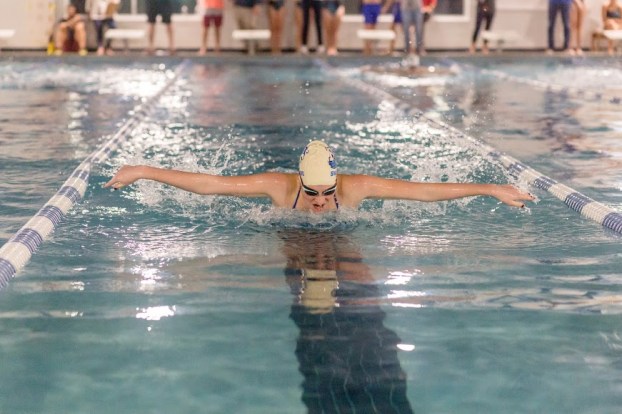 According to First Flight swim coach Dave Tonnesen, at least 47 of his Nighthawks swimmers have posted personal best times so far this season.

A likely candidate to lead the list is Cecilia Cortez, a standout swimmer who has won all her events while meeting 11 state meet qualifying times. Joining her on the state qualifying 200 freestyle relay team were Anne Holcomb, Brianne Wilson and Emmy Trivette.

Also of note has been Christian Miller, who achieved his first regional qualification time in the 400 freestyle by slicing 22 seconds off his previous best time. He then followed with a 21 second improvement in the 200 freestyle. 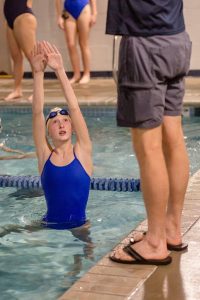 During a break in the December 5 meet at Nags Head First Flight swimmer Bell Cooper gets instructions on making breaststroke turns from one of her coaches. Kim Crouch photo

Equally impressive has been Ethan White with a regional qualification time in the 200 individual medley where he dropped 23 seconds and in the 100 butterfly.

Other regional qualifiers include Ben Tonnesen in the 400 freestyle and Erin Bembridge in the 100 backstroke.

Heading into the holiday season, First Flight was scheduled to face Manteo High School and John A. Holmes High School 4 p.m. at Nags Head YMCA December 12 and then compete in a 4 p.m. swim meet at Elizabeth City YMCA on December 14. 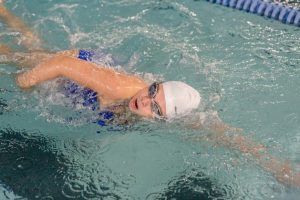 First Flight swimmer Maggie Beacham finished fifth in the 200 freestyle, sixth in the 50 free and was on the fourth place 400 free relay in a December 5 meet with Manteo, Northeastern and Pasquotank. Kim Crouch photo

Team Scores from the December 5 meet include:

First place First Flight finishers at a December 5 meet include:

Concert pianist and recording artist David Roach will be performing in both Hyde and Tyrrell counties this holiday season. Roach,... read more