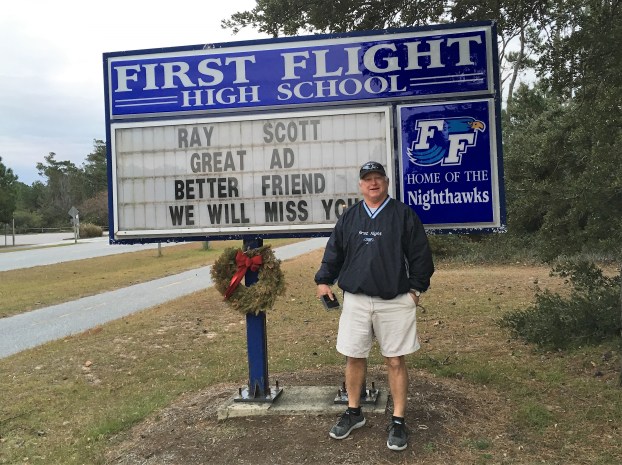 For more than 14 years, Ray Scott has called the shots for First Flight athletics and under his leadership, the high school’s sports programs have flourished, achieving everything from conference championships to state titles.

Last Friday, however, coach Scott hung up his cleats for the last time. Now, this outdoor enthusiast hopes to fill his days with early morning duck hunts and all-day fishing expeditions.

He’s had a great run, but now it’s time for him to do other things.

“I’ve been blessed to work with good people here – it’s made it fun,” he said. “Made it a place where you want to come and work with the people here.”

From early that morning, Nov. 30, until well into the evening, his co-workers, current and former students and athletes honored him. Out front, the school’s message board saluted him: “RAY SCOTT GREAT AD BETTER FRIEND WE WILL MISS YOU.”

Back inside before the first bell rang, Marie Ward and Karol Etheridge bestowed gifts on him and in general, spirits were running high. Administrative assistant Kathy Davis praised him too. 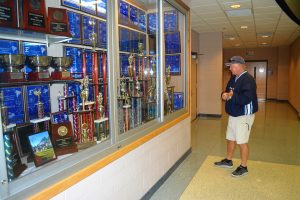 First Flight athletic director Ray Scott examines some of the hardware in the Nighthawks trophy case located in front of the gym. Daryl Law photo

Who knew each were singers?

Coach Williams came through the back entrance where the buses and riders arrive.

“One more time, ‘Na na na na na [goodbye],’” the coach sang. Then they quickly exchanged details for the boys’ basketball team’s departure for a game in Raleigh that night.

Scott said Williams will fill in as interim athletic director for the remainder of the school year and “possibly longer.”

Next, it was Prince’s turn on the microphone.

Scott answered quickly: “I am gonna miss it!”

Prince agreed: “Sure you are!”

The veteran football coach also complimented Scott on keeping all of the fields looking so good over the years. “These fields are so amazing!”

It’s not an easy feat, but Scott’s football roots run deep; he played at Guilford College in Greensboro and at Northeastern High School in Elizabeth City before that.

Standing across from the six large windows of the trophy cases in front of the gym, it is evident the school has dominated during the 14 years since it opened. Numerous trophies, conference championship plaques, Wachovia Cups and multiple career 1,000-point basketballs pack the shelves.

The 31 sports programs Scott manages have produced 45 regional and state winners and runners up, he said. For his first six or seven years, Scott also worked as the baseball coach for the Nighthawks. But the long seasons eventually became harder to recover from, so after a while, he stepped down.

But the 14 to 16 hour days never stopped. If there was a sporting event after school, Scott was there, typically clad in his trademark attire: a First Flight logo shirt, khaki shorts, sneakers and Nighthawks baseball cap with razor-style shades perched on the bill.

Along the way, he helped the school pick up two women’s soccer state titles, one for the men’s soccer team and one for the wrestling team, too. Several individuals have also won state golds.

He remembers such athletes as Kristina Argiroff, who scored the winning goal for the girls’ soccer team in the state 2A championship and then went on to play for N.C. State for all fours years. Gigi Rameriz recently graduated from ECU, where she played goalie for the Pirates.

As for the handful of 1,000-point basketballs, they feature names of the past greats – Argiroff, Konstanzer and Jacobson to name a few.

And then there are the runners, Weston Lawler and Alex Rodman – she had help on a state championship running relay team of Jill O’Dell, Hailey Schreyer and Nina Perry, coach Scott said.

Current sophomore Katherine Schuster has already grabbed state gold in golf her freshman and sophomore years, Scott said. Keep an eye on her career. First Flight also has Braxton Hughes up at University of Richmond. Prince said he was one of the best kids he’s ever coached.

Jacob Golliday made it through four years playing D1 baseball and the relatively new lacrosse program and football have sent some players to Hampden-Sydney (Va.) and beyond. Some graduates are already coaching, like Jordan Lane.

So what was his secret to success? Scott said he had a lot of help in the beginning from a handful of great coaches who left Manteo for the new “beach” high school, First Flight.

“I was fortunate to have these coaches here,” he said. “They helped me get the programs running right.” Scott also recognized the two senior coaches, Prince and Bill Head, who have 40 years experience apiece.

“We’re lucky to have people like that,” he said.

Another aspect that drew Scott to the First Flight job was the Manteo High School athletes he’d seen in action while coaching at his alma mater Northeastern, where he was named Best All Around Athlete for playing football, basketball and baseball his senior year.

He said he knew the “kids” here were “hard working” and that he would end up with that type of athlete at First Flight. “We have been very blessed,” he said. “The kids are coachable.”

But there was plenty of hard work too and he said he had to do a lot of adjustments to the baseball and softball fields that first year or so. He’s invested so much time in the fields it will be strange not to see him out there cutting the grass or grooming the infield.

After retiring, coaches and A.D.s aren’t allowed to work for the schools for six months. Perhaps after that time period, we’ll see him out there in his shorts and shades again. But for now, he’s happy to pull on his waders and take a different type of sporting shot. 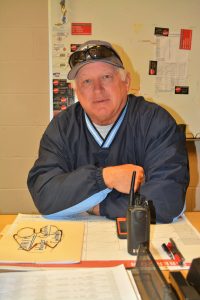 “What’s for dinner?” Everyone can relate to this question, right? For many people, this question brings a sense of excitement... read more